Welcome to the website for Australian-Swiss flautist, Bridget Bolliger. 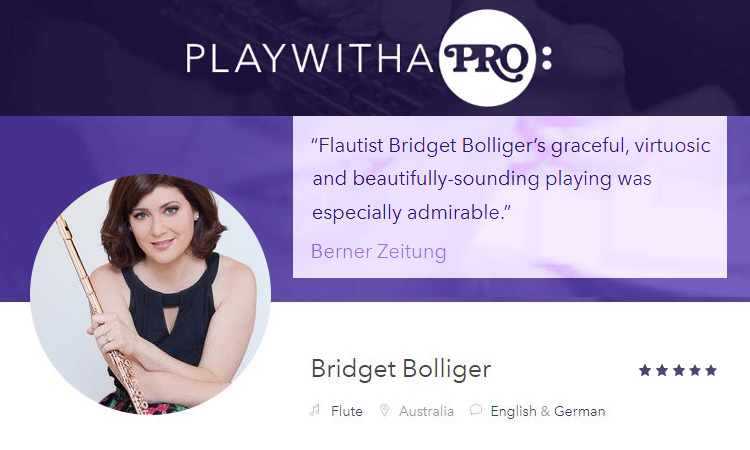 “‘Dancing Shadows’ contains some frankly ravishing music, delicately and finely wrought, continually pulling free of its descriptive moorings to be carried off by darker undercurrents. One couldn’t hope for better advocates for this music than flautist Bridget Bolliger and pianist Andrew West.”

“A celebration of the lyrical and colourful music of Miriam Hyde (1913-2005). The disc features sparkling performances from Bridget Bolliger and Andrew
West, plus readings of the composer’s poetry. ****”

“The performances of this music by flutist Bridget Bolliger and pianist Andrew West are simply not to be bettered. The crystalline clarity of Bolliger’s tonal production is the very essence of what flute sound should be, and her expressiveness and turns of phrase are most conducive to presenting this music in a way in which its composer surely would have exulted. …..in short, I stand in awe at the superb music-making of this duo. Cala’s splendid sonics likewise add to the stellar musical experience that this disc affords the listener… ***”

“With such an outstanding pedigree it’s a crime Hyde’s music is not widely championed. ‘Dancing Shadows’ is a collection of Hyde’s chamber music for flute and piano. Swiss Australian flautist Bridget Bolliger and pianist Andrew West are wonderful advocates for this repertoire. The title recording has Bolliger doing just that , as the flautist dances up and down the entire range of the instrument ….demonstrates the impressive musicianship of Bolliger and West. Bolliger’s ravishing upper register shines in the ‘andante pastorale’ and West is a generous and skilful accompanist.”

“From the very first notes you will be blown away, both by Bolliger’s glorious sound and West’s expert handling of the accompaniment.”

“Flautist Bridget Bolliger has all the ingredients necessary, tonally, technically
and expressively, to convey the music’s attractive mood setting and Andrew
West lives up to his reputation as an outstandingly sympathetic accompanist
and colleague…”